The opening of Star Wars: Galaxy Edge is going to be the biggest event in recent Walt Disney World history. The new land in, Hollywood Studios, will be the most anticipated development at Walt Disney World since the opening of the Animal Kingdom in 1998. While there has been plenty of exciting additions since 1998 nothing has caused the widespread excitement of a Star Wars Land. Details of the new attractions are still limited but we are slowly starting to receive a trickle of information. Our Guide to Star Wars: Galaxy Edge explores everything we have learnt to date. Keep checking back as we will add the latest Star Wars: Galaxy Edge news as we receive it. 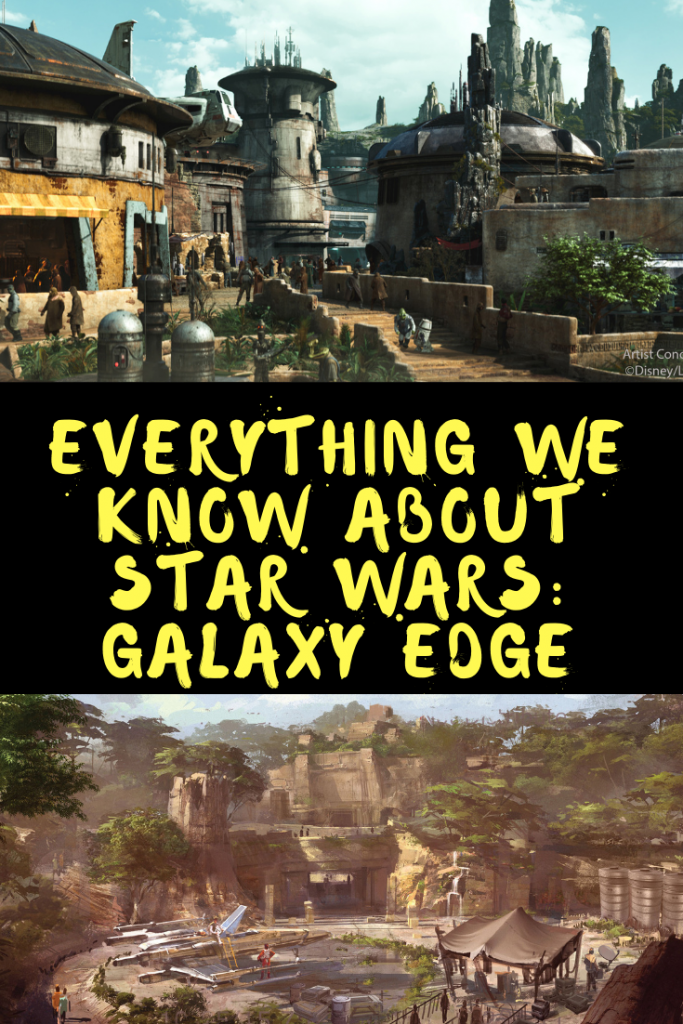 A Star Wars Land was first announced at D23 on August 15, 2015, by Robert Iger. The land is being built not only at Hollywood Studios but also at Disneyland Resort in California and each will be a massive 14 acres. Since the announcement, an extra land has been announced at Walt Disney Studios Paris but details on this new land are even slimmer.

Star Wars: Galaxy Edge is obviously the biggest event at Walt Disney World in 2019 but it will not open until late fall! This announcement will obviously disappoint the many guests who are visiting during peak-season 2019. The version at Disneyland, however, will open in time for summer 2019.

Star Wars: Galaxy Edge is described as being an interactive and immersive experience like stepping into another planet. Guests will visit the village Black Spire’s Outpost in the planet Batuu.

The largest settlement on the planet Batuu, Black Spire Outpost is an infamous stop for traders, adventurers, and smugglers traveling around the Outer Rim and Wild Space. Off the beaten path, this outpost has become a haven for the galaxy’s most colorful — and notorious — characters. Widely known for the petrified remains of its once towering ancient trees, the spires now stand guard across the river valleys and plains and have long captured the imagination of travelers to this planet. To the first settlers, these petrified spires became more than just landmarks; they became the heart of the outpost itself. Disney Parks Blog

Whilst visiting Black Spire’s Outpost guests will find themselves in the middle of the action. Throughout your journey, you will meet many familiar people plus the odd interesting creature. There will even be a Catina called Oga’s Cantina where you can try blue milk plus alcoholic beverages.

Oga Garra is the proprietor of the Cantina and keeps unruly guest in order! The cantina is immersive so expect stormtroopers and familiar faces to make an appearance. Music is provided by the Cantina DJ Rex who you might recollect as the former StarSpeeder 3000 pilot droid in the original Star Tours.

Black Spire Outpost has plenty more to explore Including a street market with food stores and plenty of shopping options. In addition, you will meet creatures and characters from the Star Wars Universe as you explore. Plus the land will have its own unique theme written by John Williams.

There will be 2 big new attractions at Star Wars: Galaxy Edge although details are still relatively sparse:

Expect Big Crowds and long opening hours at Hollywood Studios once the attractions are open. Perhaps the biggest crowds though will hit Disneyland which will be the first resort to experience Star Wars: Galaxy Edge. It has been anticipated up to 200,000 people could descend on Disneyland for opening day of Star Wars: Galaxy’s Edge in Summer 2019.  If this should happen the whole area could come to a halt!

If you want the complete Star Wars Experience a new Star Wars Resort has also been confirmed. No opening date has been announced yet for this future resort. The hotel will be located just south of Disney’s Hollywood Studios. Disney is promising an immersive experience where each guest will have their own unique adventure.

We will update this guide regularly as we receive more Star Wars: Galaxy Edge News.

Star Wars: Galaxy Edge is not the only new attraction at Walt Disney World in 2019. Our guide has further information.

We actually don’t think 2019 is the best year to visit Walt Disney World.

We have created a selection of Disney World Planning Tips to help create the Ultimate Disney Vacation.