If you want to find out all about the latest new attractions at Walt Disney World we have created a new post(May 2019) highlighting everything that has already opened in 2019, everything still to come & what has been delayed. The post includes all the latest from Star Wars: Galaxy’s Edge.

Both 2017 and 2018 were fantastic years at Walt Disney World. The opening of Pandora – The World of Avatar and Toy Story Land have added whole new dimensions to Walt Disney World. 2019 isn’t going to be a quiet year either with a list of new attractions to enjoy. However, the best of these attractions are not due to open until the end of 2019 which has had us questioning whether this is 2019 a year to skip Disney World. If you are planning to visit during 2019, here is everything that is New at Walt Disney World in 2019 including Star Wars: Galaxy Edge. 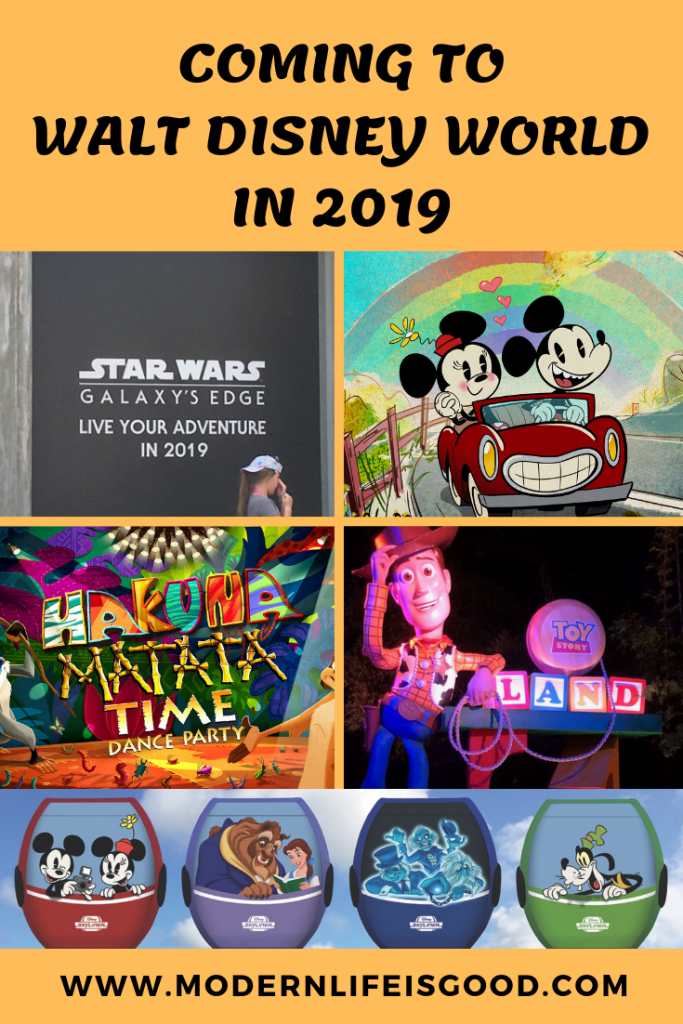 Move It! Shake It! MousekeDance It! Street Party

Move It! Shake It! MousekeDance It! Street Party replaces The Move It! Shake It! Dance and Play It! Street Party and is due to start January 18, 2019. This new Street party will occur several times a day down Main Street USA. Guests will be invited to join an energetic dance party with remixes of “Mickey Mouse Club” melodies and more. Joining Mickey and Minnie will be Donald Duck, Daisy Duck, Goofy, Pluto, Max, Chip ’n Dale and more.

The opening of Toy Story Land at Hollywood Studios made Pixar Place redundant and it has been boarded up over the last few months. However, on Jan. 18, Pixar Place will transform into a Municiberg city block from Pixar’s Incredibles films. There will be a dance party several times a day starring Mr Incredible, Mrs Incredible and Frozone. In addition, Edna Mode, greatest super suit designer, will be meeting guests plus there will be a selection of her best suits on display. Plus if you want to play detective you can follow clues to find Jack-Jack.

Dance Parties seem to be the “in-thing” at the moment and we will shortly be getting another! Celebrating 25 years of The Lion King, Timon & Rafiki will be hosting the new Hakuna Matata Time Dance Party in Discovery Island at the Animal Kingdom. The new party will be starting January 18.

Lightning McQueen’s Racing Academy is scheduled to open in Spring 2019 at Hollywood Studios. Guests will get face to face with Lightning McQueen & learn from his years of experience on the track. Details are still limited but it has been described as a unique attraction.

The Disney Skyliner is a new gondola lift system which will open in Fall 2019. The Disney Skyliner will connect Disney’s Art of Animation, Pop Century, Caribbean Beach resorts and the future Riviera Resort with Epcot and Hollywood Studios. I’m still uncertain about the wisdom of this system but it will be interesting to see how it alters resort transportation options on opening.

IllumiNations: Reflections of Earth is due to close after the 2019 summer season. A new night spectacular is due to launch in 2020. Surprisingly Disney has announced that there will be a new interim show called Epcot Forever until the BIG NEW SHOW opens. This does seem to be a rather unusual step but we assume the new show needs a bit of extra construction time. Epcot Forever will feature classic Epcot tunes with fireworks, music, lighting, lasers, and special effects kites.

This new show will be opening in the France Pavilion in Epcot. I’m certain it will prove to be very popular but it is hardly an E-Ticket attraction.

2019 will be the Year of the Mouse at the Magic Kingdom as we celebrate Mickey turning 90! There will be a host of celebrations but events announced to date include:

Disney After Hours has run for a while at The Magic Kingdom and for the first time in 2019, they will also run at the Animal Kingdom & Hollywood Studios. These hard ticket events allow you to experience the park for 3 hours after regular closure. You are promised little-to-no wait for attractions, unique experiences and character greetings. Ice cream, popcorn and select beverages are also included in your admission. However, these experiences are not cheap!

Taking the place of The Great Movie Ride in the Chinese Theatre this will be the first attraction to star Mickey Mouse in any Disney Park. The attraction is expected to open in time for Summer 2019(latest information suggests it will be a Fall opening!). Mickey and Minnie’s Runaway Railway will make guests part of a Mickey Mouse short. Disney is promising new technology for the attraction which will offer a 3D experience without the need for glasses. However, should they have replaced The Great Movie Ride?

A new nighttime experience will début at Disney’s Hollywood Studios in May 2019. This new show will be part of the park’s 30th Anniversary celebration. State of the art projections will take guests through a tour of 90 years of Disney Animation.

Update: We now have an opening date and it is earlier than we expected! Find out all the latest news in our March 2019 Disney World Update. We will be providing a longer update to this article shortly.

Star Wars: Galaxy Edge is obviously the biggest event of 2019 but it will not open until late fall! This announcement will obviously disappoint the many guests who are visiting during peak-season 2019. The version at Disneyland, however, will open in time for summer. Star Wars: Galaxy Edge is described as being an interactive and immersive experience like stepping into another planet. Guests will visit the village Black Spire’s Outpost in the planet Batuu. Whilst visiting Black Spire’s Outpost guests will find themselves in the middle of the action. Throughout your journey, you will meet many familiar people plus the odd interesting creature. There will even be a Catina called Oga’s Cantina where you can try blue milk. There will be 2 big new attractions at Star Wars: Galaxy Edge although details are still relatively sparse:

Expect Big Crowds and long opening hours at Hollywood Studios once the attractions are open. Exclusive music written by John Williams will be heard in the land.

Disney World likes to make the occasional unexpected surprise. Expect there to be further new attractions announced as we approach the summer. We will update our New at Walt Disney World in 2019 Guide when we learn more.