Our 5th and last full day at Disneyland Paris was spent between both theme parks. However our day started inside Sequoia Lodge having breakfast at the Golden Forest Club Room.

The Golden Forest is an upgrade within Sequoia Lodge and provides access to the club room. Upgrade fees to the Golden Forest, on occasions, can be reasonably priced and give a number of benefits. Guests get an included breakfast buffet, afternoon tea & soft drinks served throughout the day. The breakfast is very good with an impressive choice of hot & cold items. It is certainly worth checking the price of the Golden Forest before booking as breakfast at Disneyland Paris is not cheap.

Our first park of the day was at Disneyland Park. The park was much quieter than our earlier visits. Halloween festivities have now finished and the majority of decorations had been removed over night. Christmas decorations will soon be taking their place and the resorts already have most of their decorations up. We are now in the off-season at Disneyland and it was noticeable the number of attractions which have been shut since we first arrived.

Early afternoon we transferred over to Disney Studios to complete missed attractions and to grab a few extra rides on Ratatouille. Crush’s Coaster, which I have not ridden for several years, is an excellent coaster which provides a unique experience. Despite its enduring popularity, waits often hit 2 hours, it is odd it hasn’t been added to any other Disney Theme Park.

Dinner was at Chez Remy the Ratatouille themed restaurant. However, tonight the rat wasn’t in the kitchen but inside the dining room!

OK there wasn’t an actual rodent inside the dining room but the rat was yet another example of disastrous Disneyland Paris organisation.

We discussed in our first blog from this vacation how Disneyland Paris had introduced recently their new MagicPASS. The new system should be an improvement of the multiple cards and vouchers previously in use but staff do not seem to know how to use it.

Despite our 2 room reservations being linked the cards aren’t. Every time we use our dining plan we have to present 2 cards. Staff don’t always seem to recognise the difference between kid & adult meals. Room charging often fails and Entry to the park is very slow. Hopefully these are just teething problems and an improved system will soon be in place.

The rat tonight was that when we presented our card tonight we were informed 1 dining credit was missing! Eventually it was discovered that the Cookie House on Main Street had deducted a dining credit instead of doing a room charge as requested. A very, very expensive 5 cups of coffees!

The Head Waiter’s very un-Disney solution was to pay for our meal and then go to Cookie Kitchen and ask them to sort out the dining credit. Do they do the Disney  University  course in France? Quite how I would then sort out the dining credit she didn’t make clear. Perhaps I am being harsh but it did seem a fail in the Courtesy part of Disney’s Four Keys to Service Standards.

So what did we do with the rat?

Well we requested to speak to a manager and within minutes Guest Services had sorted out the problem. A good result!

The food at the restaurant was very good & the theming is outstanding but, even discounting our meal plan issues, service was appallingly slow.

One other issue we have noticed on repeated nights is the unavailability of the cheapest drink option. Not for the first time we have had to pick a more expensive wine due to our first choice being unavailable. This has also happened with several bar drinks too. Grandma likes her gin but is happy with the cheap stuff.

Our meal was very delayed due to the above events and we  ended up being the last guests in the park. After our meal we were escorted through a completely lit empty park. Disney Studios might not be the most magical Disney park but without any guests it does look good.

Overall we have had a great time in Disneyland Paris and I will be sad to go. There are certain things at the resort that need improving surrounding service but the overall experience is good. Hopefully these few non-Disney service & organisation issues will improve now the resort is 100% owned by Disney. 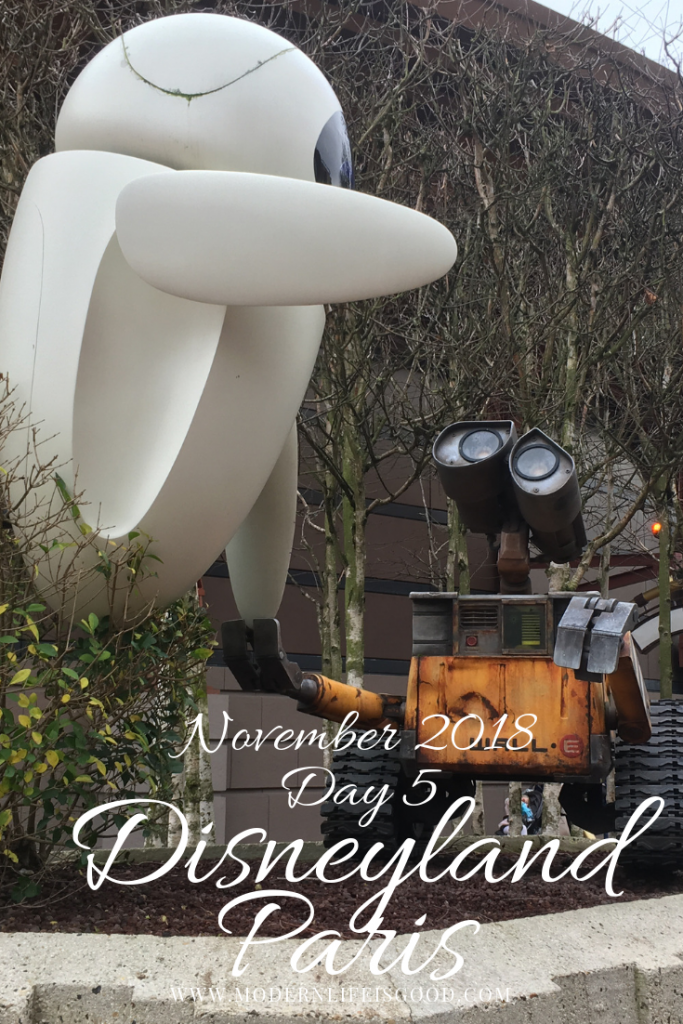