You are here: Home / Travel / Disneyland Paris November 2018 Day 4 How many men does it take to fill a Dumbo?

You might have noticed the rather unusual title for today’s post. “How many men does it take to fill a Dumbo?”

It is an odd question but it has an unclear answer. However, the question has left us all confused as we left Disneyland Paris this evening. I will discuss our fun on Dumbo and even more poor Disneyland Paris line management at the end of the post.

It is our 4th Day at Disneyland Paris and we visited the Disneyland Park. Crowds were much quieter than on earlier days and the weather continued to be good. We have been very lucky with the weather during this trip. Despite it being a bit cold there hasn’t been a spot of rain.

We started our day at Discoveryland. Disneyland Park has been lacking new attractions in recent years and Discoveryland has all the latest additions. Our day started off by riding Star Tours.

The updated Star Tours was added to the park last year. Star Tours remains one of my favourite attractions and today our ride contained no sequel trilogy footage. The original footage I feel is better than the later additions. However, the attraction is shown in French and English speaking guests not familiar with the attraction might find it a little confusing.

PhilharMagic was added to the park in recent weeks. I have mixed opinions on this addition. The video footage has been cleaned up and is vastly improved from the Orlando version. However, 4D effects are somewhat limited. The theatre has had little work for its new attraction and leftover props from Honey I Shrunk the Audience remain on the walls.

Despite it being 4th November, today was the last day of the Disneyland Paris Halloween celebrations. We watched the last showing of the Halloween Parade. This short parade is one of the best I have seen with some interesting floats and unusual characters.

Over the course of the day we toured the park and completed the remaining attractions. The work at upgrading the park has been a success and it is in fantastic condition. On quieter days it is much easier to explore this park. There are so many little details which can be easily missed in heavy crowds.

A fantastic day at Disneyland Paris but “How many men does it take to fill a Dumbo?”

Does this question even make sense?

You wouldn’t think that loading Dumbo would be the most difficult ride to fill at Disneyland. However, today numerous cast members seemed to be struggling to fill our favourite flying elephant.

The process was easy we were counted into a holding pen and took a seat on a Dumbo when it was our turn.

It seems simple but the cast member forgot to give us a number for our Dumbo. First we knew of an error was when some rather hirsute aggressive man started screaming at us in some strange dialect. It all seemed very Fawlty Towers, shouting louder does not make you suddenly understand what you are saying!

Anyway, we were moved to another Dumbo and given a complimentary Fastpass to return later in the day.

We return through the special FastPass gate and this time are given 3 coloured Dumbos to ride. However, the cast members on the various gates fail in their communication and there isn’t space for Mrs Modernlifeisgood.com.

Little Miss Modernlifeisgood.com is not happy! Her mum isn’t allowed on the ride but she was moved earlier in the day when we were put on incorrect seat.

Mrs. Modernlifeisgood gets to ride Dumbo again on her own as we all leave the attraction.

However, we are called back and allowed to ride again once Mrs. Modernlifeisgood’s ride ends. Third time lucky and we all ride together.

How many men does it take to fill a Dumbo? I have no idea but it was another example of how poorly Disneyland Paris manages lines.

Tomorrow is our last full day in Disneyland Paris and we are back to the Studios. 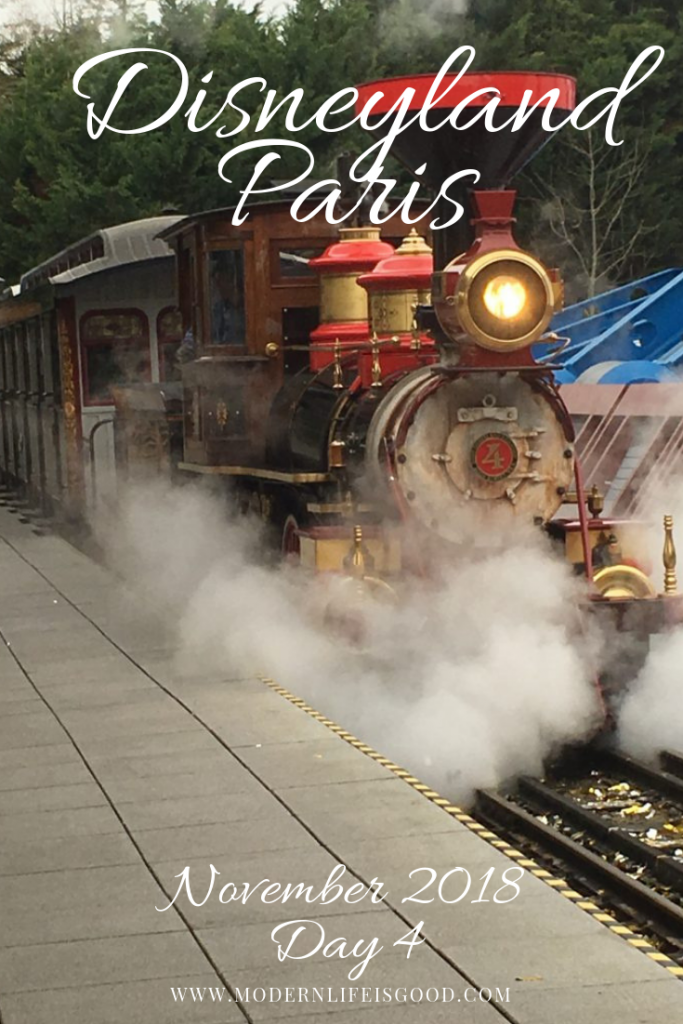