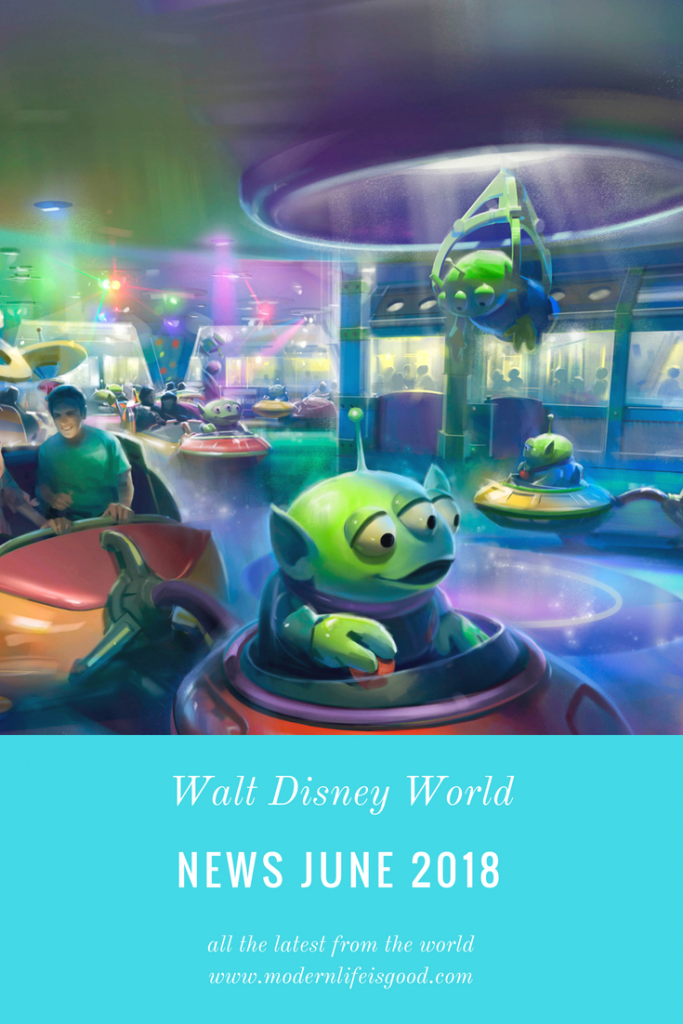 Kicking off our Walt Disney World News June 2018 is an update on Toy Story Land.

Toy Story Land, the big Walt Disney World addition for 2018, is due to open on 30 June. WDW Magic is reporting that cast members will be getting the first rides on the new attractions next week. Unfortunately, there does not sound like there will be an early soft opening of the land. However, there are rumours of Media Previews on June 28 and 29.

Are you a Walt Disney World Annual Pass Holder? If you are, there is going to be an exclusive Toy Story Treat at Hollywood Studios in September. WDW News Today has more details.

Ziggy Knows Disney has some fantastic ariel shots of Toy Story Land as it nears the end of construction. These are well worth looking at although it does not state how recent they were taken.

The Disney Skyliner, in my opinion, is the most pointless update in Walt Disney World History. If you need details of a similar White Elephant Scheme read up about the Emirates Air Line in London.

However, my opinion counts for nothing and apart from the occasional hiccup (eg Solo), Disney does tend to read their markets well. Ziggy Knows Disney has another fantastic construction update and the Skyliner is making fast progress.

Whilst the Disney Skyliner, in my opinion, might be one of Disney’s most stupid ideas the new Star Wars Resort sounds a much more exciting development. Star Wars, Solo apart, is currently Disney’s hottest property. Galaxy Edge is going to be very exciting but actually living in the World of Star Wars for your vacation sounds unbelievable.

Details of this new resort are still limited but we now have a location. The resort will be located on the south side of Disney’s Hollywood Studios, just east of World Drive. The Disney Parks Blog advises us that this resort will seamlessly connect with Star Wars: Galaxy’s Edge enabling guests to fully immerse themselves in the story of Star Wars.

Families visiting this destination will board a starship that comes alive with characters and stories that unfold all around them during their voyage through the galaxy and every cabin window has views of space! Expect a vacation at the Star Wars Resort to be heavily priced.

Disney Junior – Live on Stage has needed an update for some time. This Fall an update will be happening with the introduction of the new Disney Junior Dance Party. Guests will join Doc McStuffins, Vampirina, Timon and Mickey for a high-energy musical celebration.

All guests visiting Walt Disney World can now use the Disney version of Uber. You must have the Lyft app to use the service. However, regular Lyft and Uber requests remain much more reasonably priced.

If you are considering not having your own car whilst in Orlando, our guide Walt Disney World Without a Car is full of handy tips.

The latest Theme Park Global Attendances have been released and Disney’s park dominates the top spots. Overall the Walt Disney Company’s global theme parks saw a 6.8% increase in attendance. The biggest climber was the Animal Kingdom which saw a 15% rise in attendance and is now the 2nd most popular park in Walt Disney World. It will be interesting as we enter the 2nd year of Pandora – The World of Avatar whether these increased attendances continue.

Guardians of the Galaxy

The new Guardians of the Galaxy Coaster being built in Epcot seems to be one of the most highly anticipated new attractions in Walt Disney World. Disney Parks Blog has shared the following video which shows build progress as the foundations are laid.

Finally, some sad news that has been announced in recent days. Richard Gerth, has sadly passed away at the age of 92. Richard was the greeter at the Grand Floridian Resort and Spa. He had greeted thousands of guest since he took up the role in 1991. His service to Walt Disney World resulted in the Walt Disney Legacy Award being awarded in 2013. He will be missed by many guests.

We will be back with the latest news from Walt Disney World in July. In the meantime there will be plenty of site updates being made to Modern Life is Good over the next month.