Walt Disney World is the most visited vacation resort in the world and is roughly the same size as San Francisco. The resort is full of interesting statistics and trivia. Here are our Top 50 Fabulous Fascinating Walt Disney World Facts. How many do you know? 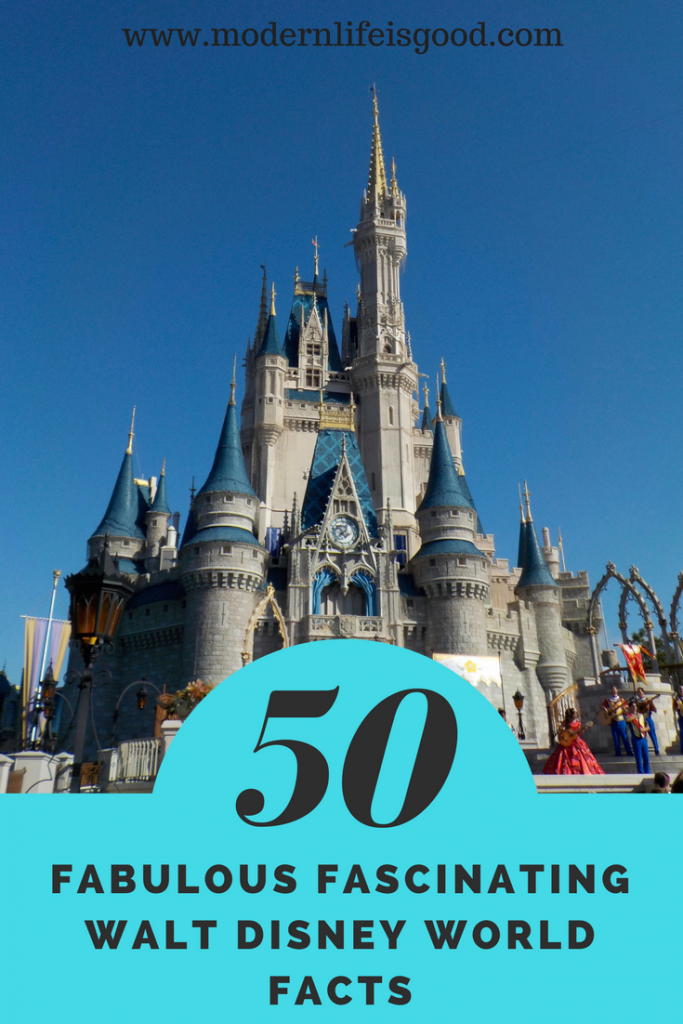 The Walt Disney World resort is about the size of San Francisco and to date only around a third of the site has been developed. The original land was purchased by Walt Disney for around $5 Million dollars.

There are service corridors under Disney World that allow cast members to walk between the different areas. In addition, this allows theming to be maintained in specified areas.

Ever wondered why you never see a costumed character not quite dressed? The secret tunnels is the answer.

You can’t buy gum in Disney World. Singapore is another famous place where there is a ban on chewing gum. However; there are no restrictions on bringing gum into parks.

The first incarnation of It’s a Small World debuted at the 1964 New York World’s Fair.

Expedition Everest & Tower Terror are both the same size

They are both 199 feet. Structures over this need a red flashing light on top due to aviation laws.

Mr Toad’s Wild Ride was an original park favourite and there were many protests prior to its closure. Toad can still be seen in a picture at Winnie the Pooh where he hands over the deeds to the ride to Owl. In the pet cemetery of the Haunted Mansion, there is a tombstone for J.Thaddeus Toad.

Walt Disney World Resort includes more than 200 restaurants, more than any other single-site vacation destination in the world.

Over 10 million hamburgers are sold at Disney World each year.

More than 1.6 million turkey legs are consumed at the parks every year. However, what happens to the rest of the turkey?

Can I have a Pepsi?

Pepsi isn’t sold at Walt Disney World. However, more than 50 million Cokes will be each year.

Although rarely full; apart from major holidays; the maximum capacity of the Magic Kingdom is 100,000. On average just under 50,000 people attend Disney World each day. The Magic Kingdom is the most popular theme park in the world.

There are thousands of Hidden Mickeys throughout the resort and more are added with each change. A Hidden Mickey is a representation of Mickey Mouse that has been inserted subtly into the design of a ride, attraction or other location. Why not see how many you can find on your next visit?

Is 189 foot tall and is made out of fibreglass.

13 Gargoyles appear on the outside of Cinderella Castle.

A lot of Hotel Rooms

There are 30000 rooms you can book at Disney World. Our guide tells you more about Walt Disney World Resorts.

Walt Disney World Resort is the largest single-site employer in the United States. 70,000 cast members are employed to help make your vacation magical.

Smile for the Camera

Liberty Oak is the focal point of the Liberty Square area. More than 500 young trees have been grown from acorns harvested off the tree.

The big thrill ride at Blizzard Beach is 120 feet high. With speeds of up to 55 mph, it is one of the world’s fastest free-fall water slides.

Under the Sea – Journey of the Little Mermaid

There are 183 characters in Under the Sea – Journey of the Little Mermaid. 128 are featured in the “Under the Sea” scene.

There is secret suite inside the castle. The suite cannot be booked and is only used as part of competitions.

More than 57,000 recycled bricks from nearby Rollins College were used in the landscape of The Landing at Disney Springs.

To keep it safe for the animals you cannot get plastic straws or cup lids at the Animal Kingdom.

You are not alone!

Every day an average of 210 pairs are turned in to Walt Disney World Lost & Found.

The Magic Kingdom opened on the 1st October 1971 as the first part of Walt Disney World.

Traditionally alcohol was forbidden in the Magic Kingdom.

In 2012 Be Our Guest became the first venue in The Magic Kingdom to sell alcohol but all other restaurants remained dry.

Recently other table service restaurants in the Magic Kingdom have started to sell a small quantity of alcohol.

The Walt Disney World Railroad circles around the entire 1.5-mile perimeter of the Magic Kingdom and makes stops at Main Street, Frontierland, and Fantasyland.

There used to be a 7th Land in The Magic Kingdom called Mickey’s Toontown Fair. It merged into New Fantasyland during the 2012 expansions.

What does Epcot mean?

Epcot was initially intended to be a Utopian City of the future planned by Walt Disney. His original vision did not materialise but the name resurfaced for the 2nd Walt Disney World Park.

The Chinese Theatre is a full-scale recreation of the original Hollywood Theatre’s exterior and lobby.

The original plans for the Animal Kingdom featured an area called Beastly Kingdom. The Beastly Kingdom was to feature mythical animals such as unicorns & dragons.

The section was never built due to budget cuts. Eventually, a new land Pandora – The World of Avatar was built on the land reserved for the Beastly Kingdom.

There are around 2000 animals representing 300 species at Disney’s Animal Kingdom.

Isn’t a real tree but built around an old oil platform.

The attraction is bigger than the entire Magic Kingdom. Kilimanjaro Safaris is the biggest attraction in all the Disney Parks.

The first birth at Disney’s Animal Kingdom was a kudu. Kudu are African antelopes. Since then over 150 breeds of animal have reproduced in the park.

The floating mountains in Pandora – World of Avatar are 156 feet tall. Forced perspective is used to make the mountains appear larger than they actually are.

It takes place after the movies

Avatar – The World of Pandora is set a generation after the movie and future sequels events.

This is strictly not allowed but is a regular occurrence. There are strict cleaning protocols in place should this happen.

Uncle Henry is more likely to end up in a Henry than on Dumbo!

Mickey Mouse has a lot of clothes

A lot of trees

More than 30 tons of fruit and vegetables are grown there every year for Disney restaurants.

There are a lot of buses

More than 26,000 feet of lights outline the Epcot World Showcase pavilions during IllumiNations.

The World Showcase lagoon is 185 acres in size and is larger than Disneyland in California!

The Eiffel Tower in Epcot is coated with a sticky substance so birds won’t perch on it. The tower isn’t full size but is made to look larger than it is. Birds perching would spoil the illusion.