7 of us travelled from Manchester to Miami on Boxing Day morning. Our destination would be the Allure of the Seas setting sail on the 27th December for a Western Caribbean Cruise. Calling at Labadee Haiti, Falmouth Jamaica & Cozumel Mexico.

From Manchester we had a short stop at Heathrow and then joined the British Airways flight to Miami on an Airbus A380. The flight was comfortable and we arrived at Miami on time. Our overnight stop was Miami Airport Hilton.

Well; it was meant to be our overnight stop but it seems Royal Caribbean  had an IT glitch and one room was not booked. Initially the hotel was not  very helpful and seemed unprepared to offer any solutions.

Eventually a more helpful Duty Manager got involved who managed to find a room in the allegedly fully booked hotel. Despite having to initially pay for the hotel room I had already paid for I’m pleased to say accounts were sorted the next morning. An unnecessary stress though after a long flight.

The Hotel did give us a complimentary breakfast the next morning and Royal Caribbean did give a small amount of compensation which went towards our Harmony of the Seas sailing. Overall both the hotel and cruise line did resolve things satisfactorily.

Next morning our transportation arrived on time and transferred us to the ship. We quickly went through check-in and were given a complimentary drink on embarkation. The welcome drink is something we have not received before and assume as it was a seasonal cruise extra. 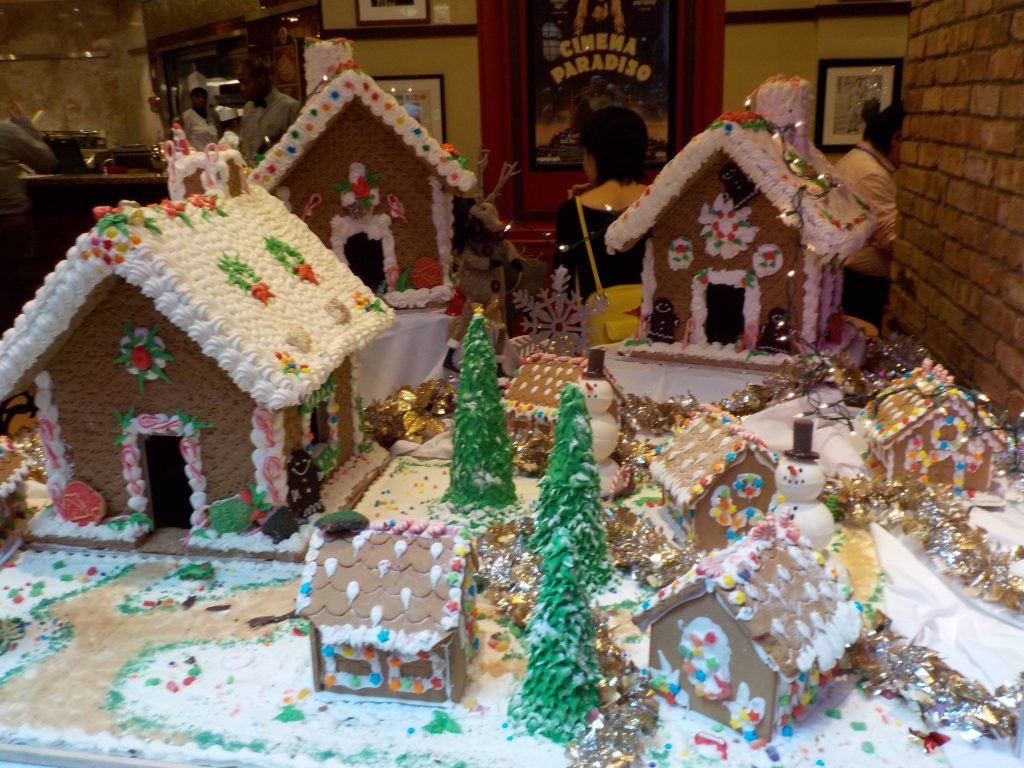 A quick tour of the ship followed and lunch in the Windjammer. Although we never did Windjammer for dinner I thought breakfast & lunch was very good.

Lifeboat drill & sail-away up next mixed with unpacking of our cases. Cabins were as expected 1 Ocean View Balcony & 2 Central park balconies. Dinner was in Silk Restaurant which we went to on 5 of the nights. Food was pretty good throughout the cruise but not as good as the last time on Allure of the Seas.

Diving show was our 1st night’s entertainment and was one of the highlights of the cruise. My parents who are experienced cruisers were staggered by the standard of production. The Aqua shows on Oasis Class ships are staggering and Ocean Aria is no exception.

Other entertainment highlights throughout the cruise included Mamma Mia, Comedy Club, Ice Games on the ice-rink & of course the New Year celebrations. We did all the main shows apart from the Headliner. The quality of entertainment overall on Allure of the Seas is exceptional.

As we retired to our cabins my Dad was met with an unusual surprise.  A Birthday cake! With “Happy Birthday Peter” written on. It seems due to another Royal Caribbean IT glitch my birthday cake for the 2nd January had been incorrectly recorded as for my Dad “Peter” for the first night of the cruise.

“Its not my Birthday”

Cakegate was eventually resolved and my “Surprise” Birthday cake was delivered to Chops Grille as eventually planned.

However; on the 2nd morning my Dad received a birthday hug off the room steward. We still don’t think she ever believed it wasn’t his birthday.

Daytime on the cruise was spent exploring the ships 7 neighbourhoods. The majority of this time was spent lounging on sundecks. The kids were very fond of their various clubs and we had plenty of time in the adult only solarium.

The neighbourhoods on Allure of the Seas are all impressive but my personal favourite is Central Park. This is beautiful at night and you can soon imagine that you are not on a ship. During the day it is still a pleasant experience and a quieter part of the ship. Central Park Cafe is somewhere not to miss for breakfast and lunch. The beef rolls have an almost legendary status on many cruise forums but I think the breakfast muffins are the real highlight.

We went to 2 specialty restaurants Chops Grille & 150 Central Park. Both of these are located on Central Park.

Chops Grille serves delicious steaks accompanied by sides and sauces. We went their for my 40th Birthday night and had a fantastic meal. We also received the correct Birthday cake!

150 Central Park is a tasting menu of easily 1 star Michelin standard food. It is the creation of James Beard Award-winning chef Michael Schwartz of Michael’s Genuine Food & Drink in Miami. Just the 2 of us went here and I would say it probably isn’t a place to take the kids.

Our stops were Labadee, Falmouth and Cozumel. In Labadee we went to the remote beach of Malfini and then spent a few hours exploring Labadee. Labadee is Royal Caribbean’s private resort in Haiti. I have heard mixed reports of Laabdee but we had a good time and would recommend Malfini Beach. Unfortunately my iPhone had a short dip in the Caribbean at Malfini Beach and never recovered.

New Years Day we visited Cozumel and went for a snorkel and tasted some of the local Tequila. This was good but more importantly I learnt that my student illness of vomiting on smelling Tequila was now resolved. Despite cure the long regretted Tequila Parties should probably not return in my 40th year.

New Year was a fantastic party which we spent on the Royal Promenade. I have written a separate report on this & the is an attached video here.

My 40th Birthday started with an All Access Tour behind the scenes of the Allure of the Seas. This is a fantastic trip which although expensive you should do. A report is attached here.

My Birthday was sadly our last night and limited the amount of alcohol I could consume. However; it was a fantastic trip and I would recommend sailing at New Year. It is expensive but New Year at sea is one of the best parties I have ever attended. The Allure of the Seas is a family ship and was enjoyed by all generations who travelled.

Quick breakfast at Windjammer on the final morning and we disembarked the ship. This was followed by the best part of 1 hour trying to find all of our cases which the baggage handlers had decided to dump in various places across the hall. Needless to say when we eventually did find our cases the handlers were keen to still receive their tips.

However; the trip was not over and we still had a private tour of Miami and the Everglades prior to our evening flight.

Our flight was delayed and we missed our transfer to Manchester. Eventually though we did get home tired but with fond memories of an excellent trip. The few IT glitches not spoiling the trip but adding to the memories.

Below is my highlights video from our trip.