Our visit to Herculaneum was in July 2016 when on the Harmony of the Seas visiting Naples. We had some difficulty agreeing where to go and by the time we booked we had few other choices. We did agree though that it was probably the right choice.

The day we visited Naples was the worse weather we met in our 3 week holiday including time spent in England. It was very wet and cold throughout the morning. However; it did improve in the afternoon. I also had a bit of a hangover so was happy we did not have a trip booked that morning. 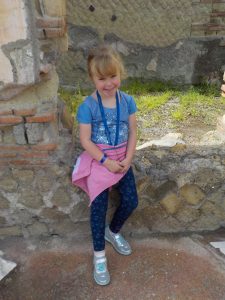 Once we got off the ship we were pleasantly surprised to see the same guide who took us around Pompeii 4 years earlier. The guide was excellent and so we were certain we would have a great time. 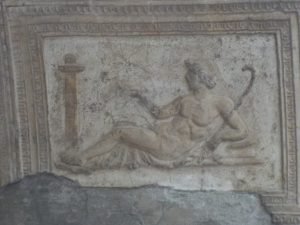 Following introductions we proceeded to visit the obligatory local trade shop and then proceeded to Herculaneum. What followed was an enjoyable few hours and an unscheduled extra hour due to our guide’s enthusiasm for his subject.

Located in the shadow of Mount Vesuvius, Herculaneum was an ancient Roman town destroyed by volcanic pyroclastic flows in 79 AD.

Herculaneum is a UNESCO World Heritage Site. It is famous as one of the few ancient cities that can now be seen in much of its original splendour.  It was lost, along with Pompeii, when Mount Vesuvius in AD 79 that buried it. Initial excavations began in 1738.

Unlike Pompeii, the deep pyroclastic material which covered it preserved wooden and other organic-based objects such as roofs, beds, doors & food.

Some 300 skeletons which were surprisingly discovered in recent years along the seashore. It was thought until then that the town had been evacuated by the inhabitants.

Herculaneum was a wealthier town than Pompeii. It has an extraordinary density of fine houses. Many of the houses include lavish use of coloured marble cladding.

A visit to Herculaneum is possible in all ships that call into Naples for the full day. Due to sunlight visits are only possible in the afternoon.

We personally enjoyed it more than Pompeii and would thorough recommend visiting instead of its more famous neighbour.

Just as a side note for passengers on cruise ships. The are multiple other destinations when in Naples including Pompeii and Sorrento. Naples itself is a very industrialised area and is not somewhere you should concentrate your time on a short visit.