For New Year we went on the then largest cruise ship in the world Allure of the Seas. New Year’s Eve on the ship is a massive celebration with various parties held throughout the ship. The is also a separate party held for teens in Studio B. The centre point for most guests is the Royal Promenade where the Cruise Director and Captain would be present to welcome in the New Year on Allure of the Seas.

The dress code for the evening was formal and this was observed by the majority of passengers. The dining room prepared a special menu for the evening which was different from the normal weekly fare. The table was also laid out with various party hats and poppers. 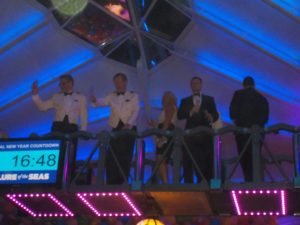 Following our dinner we went to the venue of choice for the evening the Royal Promenade. On arrival we noticed that ice buckets and bottles had been placed on most tables and marked as reserved. We had been aware that a number of venues did have a supplementary fee for the evening e.g. The Rising Tide Bar but had not been aware of the reserving of tables. Royal Caribbean had been rather aggressively selling Bottles of Champagne for the evening but we had not purchased due to having an all inclusive drinks package. We however realised at this point that a bottle meant a table for the evening. Not wanting to be left without seat for the evening we spoke to a waiter in the Bow and Stern and purchased a bottle and a table was then moved from Sorrentos to outside the pub door. The seat was perfect overlooking the bridge where the Captain would bring in the evening but did come with a charge of almost $200. This was the only sour point of the evening and I feel was an unnecessary pressure to spend extra money on an already very expensive cruise.

The evening progressed with live music until the Captain, Officers and Cruise Director joined the bridge for the last 20 minutes of what by now was a packed Royal Promenade. What followed was a massive party with streamers, balloons and songs and goes down as one of my most memorable New Year’s Eve Parties. A New Year cruise is certainly something to experience and an unforgettable evening.